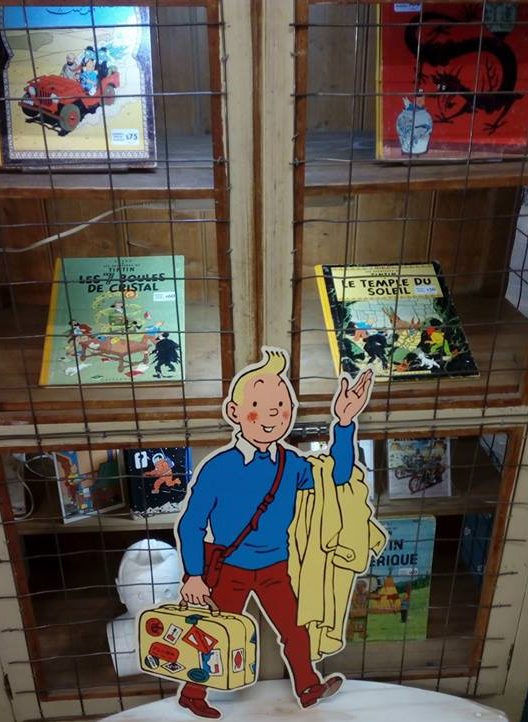 The second week of school holidays can be tough, with the initial rush of activities petering out into a seemingly continuous recording of “I’m bored!”

Enter that decades-long parental saviour Tintin who, together with his canine companion Snowy and a litany of genuine characters, has captured the imaginations of millions of children (and kids-at-heart) across the globe.

Bonjour Tintin is a celebration of this world-famous Belgian being hosted by Adelaide’s Pop-Up Bookshop in their Central Market book gallery.

“We love Tintin and knew the display would prove popular,” said Pop-Up Bookshop owner (and self-labelled entre-mature) Nick Patrick. “But the reaction we’ve had already has been mind-blowing!”

Bonjour Tintin showcases vintage Tintin Adventures from the 1950s & 60s, which, together with some more recent and new volumes, are available for purchase, plus a display of various Tintinalia (from the private collection of a local Tintinologist) for added interest.

Having opened amidst the fanfare of the Market’s Bastille Day celebrations last Friday night, Bonjour Tintin was an instant hit. “We had a collector come in as soon as we opened and buy a couple of volumes and had hundreds of patrons come through, many of whom had come specifically to see some of the old-school editions,” said Nick.

Those “old-school editions” include the first English translations of five of Tintin’s Adventures and original French language volumes from the late 1950s and early 1960s, including a true first edition of Les Bijoux de la Castafiore (The Castafiore Emerald) from 1963.

Adelaide’s Pop-Up Bookshop is located on the Eastern Roadway of the Central Market, near the Grote St entrance. Bonjour Tintin is in The Gallery Next Door (Australia’s only dedicated private book gallery) and will run until the end of July “unless someone comes in and buys all the books!”