Wanderings in Wild Australia by Baldwin Spencer (Macmillan, 1928) – 1st edition in 2 volumes with gift inscription to vol 1 “To Mrs Robert Stott / with the regards & thanks of / W. Baldwin Spencer”

As detailed in Wanderings In Wild Australia, Sergeant Robert Stott was a senior police officer in the Northern Territory who accommodated both Spencer and Gillen during their extensive stints in Northern and Central Australia. A footnote in the text also acts as some small eulogy as it was during the production of this work that Stott was accidentally killed in Adelaide. It includes the following commendation from Spencer:

“His work in the Territory extended over more than forty years, and with him has passed away one of the few remaining of the old Territorians who were officers under the South Australian Government in Pre-Commonwealth days. For years past Sergeant Stott, as head of the Police, Warden of Mining Fields, Protector of Aborigines and holder of other official positions had done, and done efficiently, the work of at least two ordinary men…”

Thus presented to Stott’s widow as a condolence gift.

*Pictured copy of Elsie Masson’s Untamed Territory has been sold 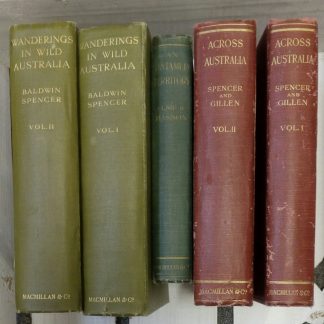