A rare First Edition of this important journalist’s Arctic journey

First Edition [Sampson Low, Marston, Searle & Rivington, 1876]; with folding route map, 8 engraved plates [6 with tissue guards still intact] & numerous in-text engravings; original publisher’s pictorial green cloth; black & gold decorations with gilt title etc; rubbed with splits at extremities; minor foxing to block edges and first few inner leaves; 339pp inc Appendix, 40pp of advertisements at rear.
In 1875, the American journalist Januarius Aloysius MacGahan travelled with British explorer Sir Allen Young aboard his steam yacht HMS Pandora on an expedition to attempt the journey from from the Atlantic to the Pacific via the Northwest Passage . The expedition only made it as far as Peel Sound in the Canadian Arctic before it met pack ice and was forced to return.
MacGahan was correspondent for the New York Herald at the time [he would later achieve even greater acclaim as a war correspondent in Europe] and, though the expedition failed in its objective, his account is one of the most highly-regarded of Arctic exploration.
Includes whole chapter on Eskimo Literature. 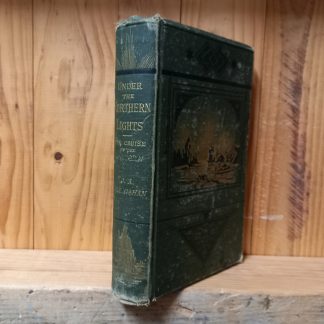