Reprint of 1919 Australian WWI battalion history by Liet. George L. Berrie (published by John Burridge, undated but circa 1990). Edition limited to 200 copies. Brown faux leather covered boards, gilt lettering and decoration, 179pp, b&w photos. Near fine. The unit was raised in Sydney and served at Gallipoli, fought in the desert campaign and the Gaza Front and Jordan Valley. Includes casualty lists for Gallipoli and Sinai and Palestine.
A well produced book covering the services of the Light Horse from formation in September 1914 to its return to Australia in August 1919. Compiled by an officer who served with the regiment throughout, it is partly based upon the War Diary. His descriptions of the bitter fighting on Gallipoli are admirably clear, as are his accounts of the cavalry tactics and charges in the Sinai campaign (Battle of Romani). The advance into Palestine, the action at Beersheba, and the raids into the Jordan Valley, are similarly well covered. Many officers and their appointments and promotions are noted in the narrative, and the book is a very sound source for military and family historians alike. 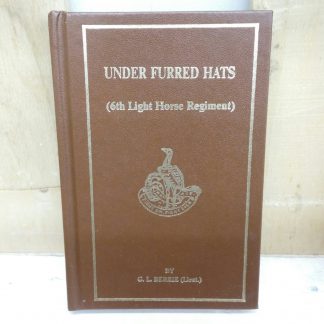