Fully titled Practical Geodesy: Comprising Chain Surveying And The Use Of Surveying Instruments; Together With Trigonometrical, Colonial, Mining, And Maritime Surveying; Also Levelling And Hill Drawing; And A Description Of The Methods Of Determining Latitudes And Longitudes.

This uncommon book has tremendous South Australian provenance being once owned by Richard John Loveday (1818–1883), a government surveyor during the early settlement of South Australia. His ownership signature, dated June 1st, 1855, is written on a preliminary page. Further, the half-title bears the ownership of his son, Ernest A[lfred]. Loveday, dated 31.12.83 (shortly after his father’s death).

Ernest A[lfred]. Loveday was also a surveyor and superintending surveyor of the Murray Irrigation Settlement. He laid out the Riverland township of Berri and the Loveday Settlement was named after him.

This book is a very good copy with impressive provenance. 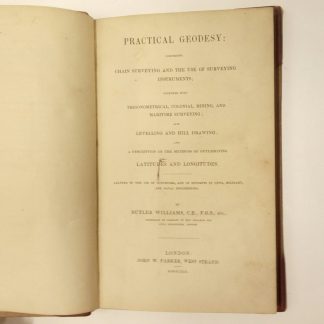