Part of The First Edition Library’s trio of “Banned Books” [we also have Ulysses & Tropic Of Cancer for sale independently or all three as a group], Vladimir Nabokov’s infamous tale of a middle-aged man obsessed with a pubescent “nymphet,” was rejected as unpublishable by every major American house. Rather than change a single word of his carefully crafted narrative, Nabokov opted instead to have the work published in Paris by The Olympia Press.

This is an exact replica of that first printing complete in two paperback volumes with price 900 francs on back, textual errors and even mispagination.

It is estimated the original printing run was fewer than 3,000 and, due to the book’s controversial nature and fragile binding genuine first editions are quite scarce and command prices in excess of ten times the asking price for this replica. 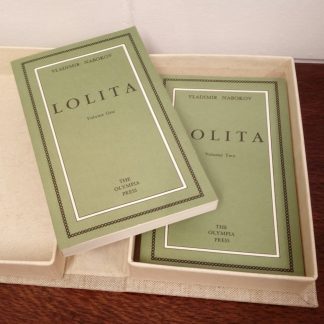