View cart “Calli e Canali in Venezia” has been added to your cart.

Journal Of The Discovery Of The Source Of The Nile [Speke]

Although all appearances indicate this to be a first edition work, we believe it to be the second issue, which used the same sheets as the first. An entry in Blackwell’s Rare Books catalogue of 1991 describes this as essentially identical to, although with finer binding than, the first issue and with the map (in excellent condition in this copy) similarly located in a pouch at the book’s rear but where the first printing had two folding maps, this re-issue has one map superimposed upon the other.

Also from the Blackwell’s catalogue: “A landmark in the history of African exploration. Speke began his African career, and his relationship with Richard Burton, when he joined the great explorer on an expedition to Somaliland. Subsequently, towards the end of 1856, Burton invited Speke to join him on an expedition to verify reports of the existence of great lakes in east Africa.

During the course of this latter expedition, Speke discovered Lake Victoria Nyanza, which he concluded was the source of the Nile. He rejoined Burton, who did not believe his theory. Speke returned to London to publicise his discovery and the expedition’s success, and indeed to assume the credit for them. His assertions were not without some justification since Burton had been ill for much of the expedition, but nevertheless the principal claim, set out in two Blackwood’s Magazine articles, resulted in open antagonism between the two explorers.

Speke, working quickly, obtained, with the help of Murchison, the backing for an expedition before Burton had even reached London. The present work is the account of that expedition. It was to verify the solution of a problem which had puzzled explorers and geographers for 2,000 years.”

Our copy is in excellent condition with an 1869 ownership name. 658pp + advertisements at rear. 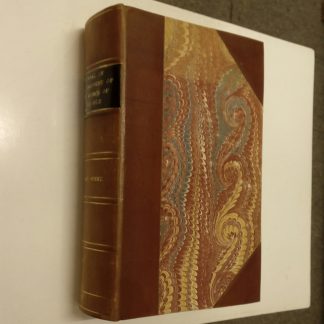 You're viewing: Journal Of The Discovery Of The Source Of The Nile [Speke] $800
Add to cart