Scarce scientific work with additional correspondence from the author to SA Museum entomologist.

First four volumes ex Unley Institute (with stamps etc) and previously owned by J[ohann]. G[ottlieb]. O[tto]. Tepper, former entomologist at the South Australian Museum. Vols 1-3 each signed by the author, Charles French, with a separate comradely letter from French to Tepper included in vol 3. Volume 5 would appear to have been obtained separately and is in very good condition (not ex-lib).

A scarce, complete, albeit largely imperfect, set of important entomology books with suitable academic provenance. The letter is a fine addition. 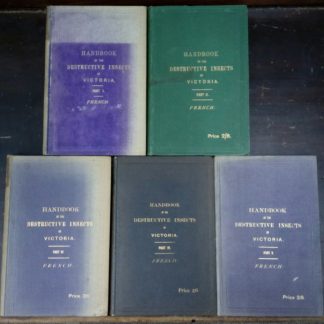 You're viewing: A Handbook Of The Destructive Insects Of Victoria [5 Vols with letter] $550
Add to cart